How to Identify Spending Triggers in Your Business

Do you notice that sometimes you just want to spend money? It’s like a little switch that goes off in your head that triggers you to buy, buy, buy. That, my friend, is what I call a spending trigger.

Join me every Wednesday 12pm PST on good ‘ol Facebook for the next episode of The Andi Smiles show!

Don’t want to remember things (‘cause- ugh- things)? Get a reminder when I go LIVE by clicking here and I’ll send you a message via Facebook Messenger right when the shows starts (plus you’ll have the replay link in your pocket!).

A spending trigger is anything that compels you to spend spontaneously. A spending trigger isn’t going to the office supply store because you ran out of ink. That’s just something that came up or unplanned spending. If you need help understanding the difference between need vs. emotional spending, check this out!

Triggers are a form of emotional spending.

By nature, triggers are emotional spending because they’re reactive spending. They’re never based on a need. Rather, spending triggers are a reaction to internal and external factors, such as a recent experience in your business or personal life, something that somebody said to you or something you’re telling yourself, or even your limiting beliefs about money.

These are spending triggers that are a result of something positive happening in your life.

We often respond with spending when something good happens, which is also why we leave these types of triggers unchecked. We tell ourselves that it’s all for a celebration, and we deserve to spend money!

The other thing to keep in mind is that spending triggers can be layered on top of each other.

Here’s an example: You get a big check in the mail. On its own, that doesn’t make you spend. You’d put that money in your savings account. However, this time, you’ve worked 12 hour days for the past two weeks. You realize how exhausted and overworked you are. You think, “I deserve to buy myself something nice as a reward for working so hard.” 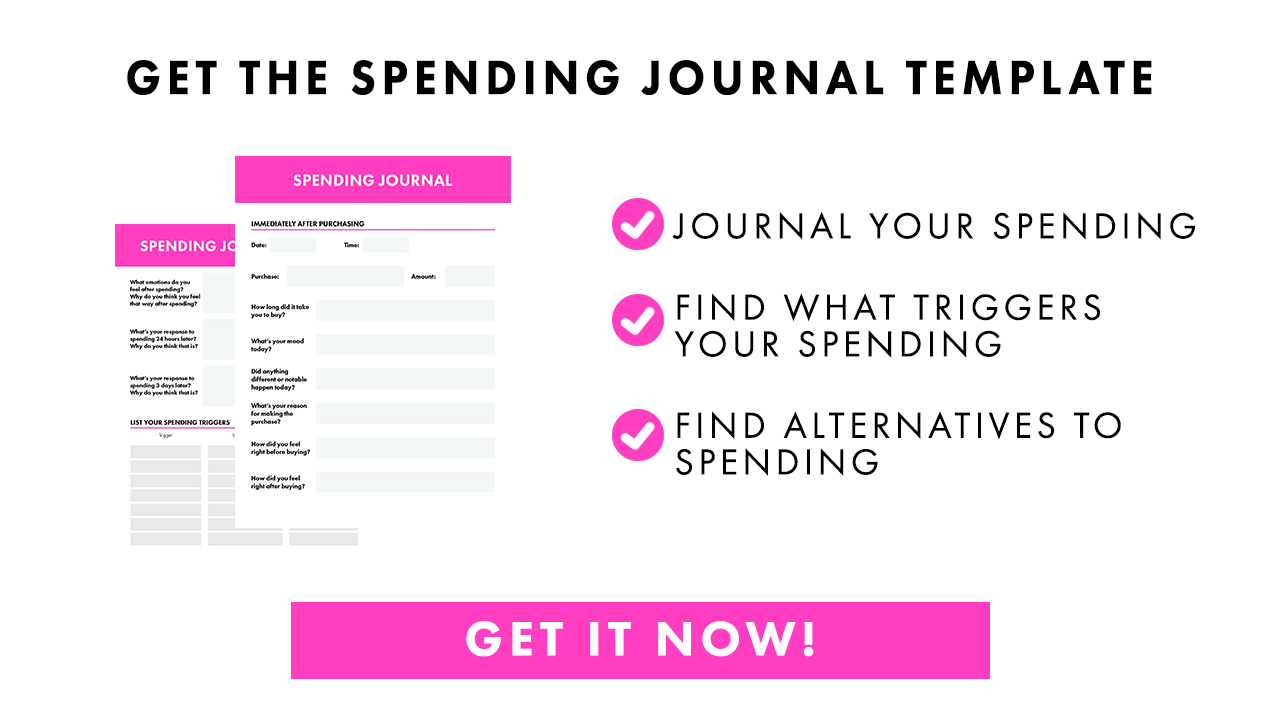 Here are the most common types of spending triggers:

This is unexpected money that comes into your business. It feels like free money because it magically fell into your lap without any effort!

You think, “Well, I have this extra money now, I might as well spend it.”  I’ll be honest with you; This is my biggest spending trigger. This is what gets me in trouble because I have a limiting belief that money’s hard to come by, and it requires a lot of work to obtain. When I earn money, sometimes I feel like it’s my only chance to buy something.

Sometimes, it doesn’t need to be extra money. Just the act of getting paid and money coming into your account can trigger spending.

This is when something really good happens in your business and you go and buy yourself something as a reward, also known as celebratory spending.

Sometimes we do celebrate ourselves with money- which is totally fine!  But, if you’re consistently buying on an impulse every time something good happens, you’ve got a spending trigger.

You’re craving self-care so you spend money on things that feel like self-care. However, the root cause of your need for self-care isn’t addressed and the spending just acts as a band-aid.

This is using buying as medicine. You’re imaging how carefree and happy your life would be if you could afford that one thing. Or, the actual act of shopping relaxes and destresses you. In both of these cases, you spend money to escape from what’s currently causing you sadness or stress.

This is a major spending trigger for people! This is when there’s a sale or discount that feels too good to pass up. It’s a type of fear-based spending.

You’re not planning on buying something… but the price is SO good that you reason that, if you pass up such a good deal, it means that you’re not good with money. Often we use saving money to justify spending money…even though you’re still buying something you didn’t plan for!

FOMO (Fear of Missing Out)

You’re worried that if you don’t purchase that amazing thing, you’ll never get the chance again. This could show up as a limited-time item, the urgency of a cart closing, or an item that’s selling out.

This is another example of fear-based spending. The fear of never being able to buy this thing that you didn’t want to begin with is so great that you impulsively buy it.

This one is going to be controversial, but here’s the deal… Many people use the excuse of spending money on others to justify their spending. We often believe that if we’re generous, it means we’re a good, more likable, that we’ll have more friends, and that we’ll be more popular. So we spend a chunk of our money on other people.

Identifying your own spending triggers helps you overcome them. But where do you start?

Keep a Spending Journal for 2 Weeks

The best way to identify your spending triggers is to keep a spending journal for two weeks. It’ll help you track when, where and why you’re spending money. At the end of two weeks, you’ll reflect on your spending patterns.

A spending journal is not for the faint of heart. You have to confront your spending habits for two weeks which can be difficult. It takes diligence and motivation because it’s hard for most people to do one thing every day for 2 weeks and it’s even harder when that one thing has to do with money.

I have a template that you can use for your spending journal. You can tune in to the video at timestamp 24:40 to watch the demo. You can observe how I fill in the template to cover a variety of spending habits. This journal will help you understand what you’re buying, how often you’re buying it, and what your reasoning was behind the purchase.

Immediately after your purchase

These are the questions you’ll answer immediately after the purchase:

24 hours after your purchase

You’ll ask yourself two questions 24 hours after the purchase:

3 days after your purchase

3 days after buying you’ll ask yourself the same questions:

Two weeks after starting your spending journal you’ll ask yourself a series of reflection questions. Go back through all of your entries and search for patterns. The key here is to search for trends and answer:

I know that seems like a lot of questions to answer but they’re important for finding your triggers!

Even if you don’t spend, keep a log of the days that you don’t spend. It’s helpful to understand the circumstances that DON’T trigger you to spend too.