5 Ways Money Shame Shows Up in Your Small Business

Is there something going on with the money in your business that goes beyond bookkeeping, tax deductions, and Profit & Loss reports? You know that it’s emotional but can’t quite put your finger on it… yet it shows up every day.

Friend- it might be money shame. Money shame is the is all the ick we feel about money that gets rolled up into our beliefs, actions, inactions, and resistance related to money. And it’s called money shame because we’re too embarrassed to talk about how it’s showing up in our business!

Well I’m ready to expose money shame! This week on the Andi Smiles Show I’m telling you 5 ways money shame shows up in our businesses and one thing you can do today to move past the shame.

Join me every Wednesday 12pm PST on good ‘ol Facebook for the next episode of The Andi Smiles show!

Don’t want to remember things (‘cause- ugh- things)? Get a reminder when I go LIVE by clicking here and I’ll send you a message via Facebook Messenger right when the shows starts (plus you’ll have the replay link in your pocket!).

I want you to understand how money shame impacts the overall health of our businesses. First, let’s answer the initial question: What is money shame? Money shame is our negative thoughts toward money that hinder our business growth.

The amount of strategies we can implement into our cash flow and bookkeeping systems is limitless. However, none of them will ever work efficiently if we feel money shame. It will sabotage you and your business.

Here are three ways that money shame creeps up in our businesses:

I will cover all three in further detail at a later point, but in today’s post, I’m specifically talking about unconscious actions. We’re going to hone in on this specific topic so that you can become aware of the actions you’ve been taking.

Recently, I conducted a poll in my free Facebook group. I asked everyone who participated,  “Are you overspending or underspending in your business?” The vast majority said that they were overspenders.

Overspending is spending money that you don’t have.

This isn’t to say that if you spend money at any time, you have money shame.

Overspending is when you make purchases on business investments that you don’t need or you aren’t using. Have you ever purchased an online course and never finished it? Do you buy planners and never fill them out? Instead, they collect dust while sitting on your nightstand? Those are a few examples of overspending.

Another overspending tactic that I witness is when people spend money in order to prove that they’re somebody that they’re not. You want to buy things that reflect an idealized version of yourself. I see this happen a lot when people shop for new clothes. They will buy expensive brands in sizes that barely fit because, in their minds, they want to look more confident and professional.

Instead, they feel LESS confident because they are wearing clothes that don’t suit their personalities. They feel uncomfortable. Sometimes, those clothes sit in the back of the closet and the price tags are ripped off.

There are justifications that people use for overspending. I’ve worked hard, and I deserve it. That’s a big one, right? Or…

I better buy it now because I won’t have money to buy it later.

I need to stock up on this item now, because I may not have money to purchase it later.

I only need one ream of paper, but I’m going to buy 20 reams of paper, just in case.

The “just-in-case” mentality is how we justify overspending.

Let’s talk about the impact of overspending in your business. Debt, debt, debt! That is typically number one because you feel tempted to spend money because you have credit cards to back that up. But you’re never going to pay them off if you keep adding on bills to them. Because you keep spending, you’re setting yourself up for very stressful situations, like not having enough money to pay taxes.

On the other hand, there’s another habit that some business owners allow to consume them. That habit is underspending. 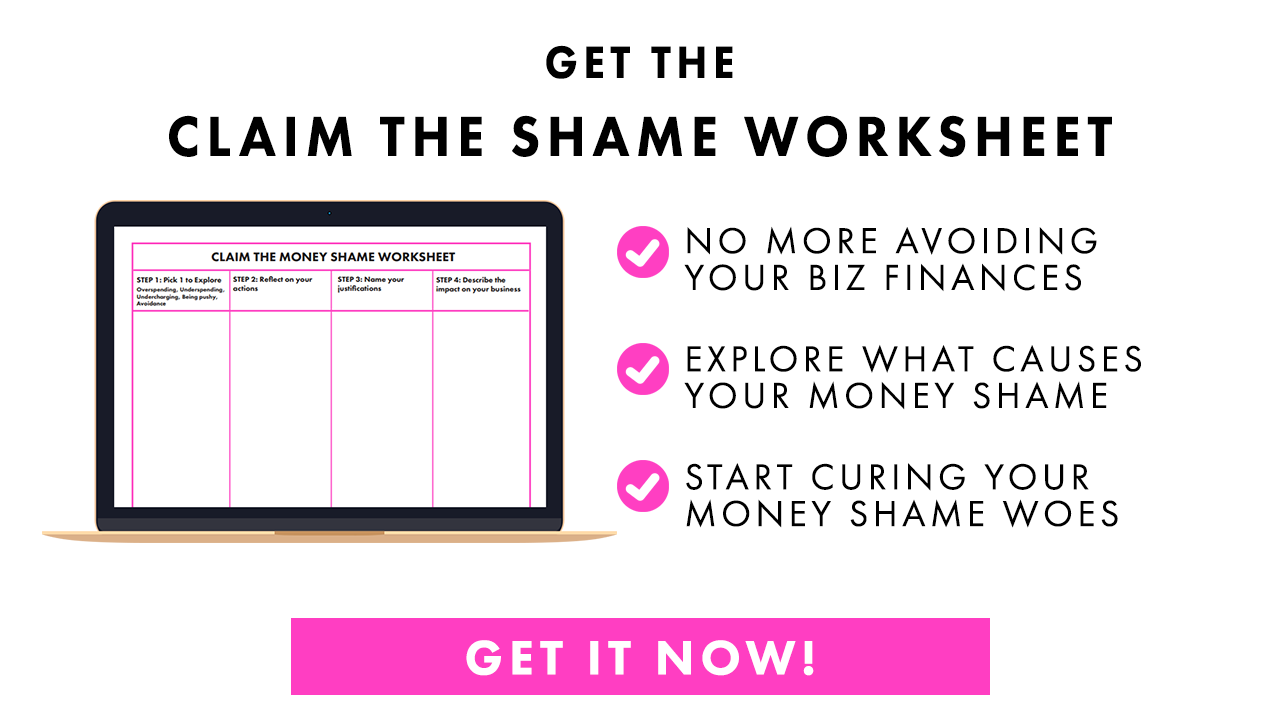 Underspending is not spending any money because you’re too afraid that you’re going to lose it. Fear is rooted in your underspending habits.

Guess what? It prevents you from experiencing business and personal growth. It can also prevent you from streamlining your business processes, which means you’re being overworked. You’re not making the investments that your business needs, so it plateaus.

You can afford the investments, but you just aren’t willing to take the next step.

There are also justifications that people use for underspending.

I should save it for something better.

It’s the fear of losing money. It’s the hoarding of money and being too afraid to dole it out.  Let’s talk about the impact of underspending stalling your business growth.

If you’re a chronic underspender, then your business growth will eventually be stalled. There will be a point where you need to spend money on something, but you won’t do it. A lot of underspenders are overworked because they will not make the investment to outsource work or systems that will streamline their processes.

Underspenders are exhausted, frazzled, and overwhelmed.

Finally, inaction. You can’t even make a decision about buying anything because you’re so scared of spending money, so you ultimately avoid making a decision altogether.

The next unconscious action is entering the territory of Andi’s life story! Undercharging has been the number one way that money shame exists in my very own business. Yes, even I experience money shame from time to time.

Undercharging is being afraid to ask for a wage that reflects your true value.

In my case, I felt like I didn’t deserve money. That led me to undervaluing my services and setting my rates too low.

Say you’re a Virtual Assistant. Now, I’m not talking about newbie VA’s charging $20-25 an hour because they are brand new and looking for experience. For the first 6 months, that’s fine, because you’ll be charging $30-35 in no time.

I’m talking about the VA’s who are only charging $10-15/hour because they don’t believe that anyone is ever going to pay them the going rate. This is charging mucher lower than the fair market rate because you fear that you will never get clients otherwise.

Undercharging is also somebody who never raises their rates because they don’t think they are worthy of a pay raise. That was me. I didn’t raise my rate for six years even though my skill set had shot up way, way, way higher than when I first started. I stayed at a undercharging beginner bookkeeper rate for six years.

Does this sound like you? Every time somebody asks for a discount or sliding scale, you immediately give it to them. That’s another example of undercharging. As soon as someone asks you for it, you just hand out a discount.

On some level, you know you should be charging more, but there’s a fear of rejection. You’re afraid of somebody telling you off.

With that being said, let’s identify the undercharging justifications.

Charging this much is too expensive for my clients.

Raising my rates on my current client is too much of a burden for them.

Other people can make that much money because they’re rockstars at what they do, but I’m not on their level yet.

All of these thoughts tie into a trust issue that you have with your clients and your leads. You don’t trust them to value you or pay you the rates that you deserve.

Let’s talk about the impact of undercharging.

Well, poor cash flow, for one. You’re not making enough money to sustain your business when you undercharge. Remember we talked about always hovering, walking that line of overdraft and over zero.

Your work/life balance is terrible because you’re constantly working! A lot of the work you’re performing isn’t even getting you paid. You’re not being paid enough for the work that you’re doing, so you end up working double or even triple the amount.It can be exhausting. I did that for years. I understand how undercharging can have a significant impact on your business.

Here is the next one, which a lot of us don’t want to acknowledge: being pushy. So not a lot of people talk about this, but this is definitely a sign of money shame. Being pushy is rooted in a scarcity mindset, and because of that, you’re overly pushy with potential clients and customers.

Examples of this are trying to sell something to somebody that it’s not a good fit for. You’re pushing somebody to buy, even though you’re aware that they are not your ideal customer or client. It really isn’t something that they need or should be using at this point in time. You may also be crossing boundaries by following up too frequently when they initially tell you no.

You’re subconscious is basically telling you that nobody will purchase from you unless you are all up in their face. If you’re not bold, you will disappear. This all stems from the scarcity mindset which convinces us that there are not enough customers or clients to go around.

I was really pushy. I did send way too many follow up emails.

Number five is avoidance. This one is going to be straightforward because I think all of us have avoided money at some point.

It’s not taking care of your finances, your income and expenses, and your bookkeeping. It’s avoiding the money altogether. You may refuse to look at your credit card or bank statement because you’re worried about what the numbers may reveal.

The key here is that you are actively avoiding the discomfort of taking care of your finances. This isn’t like you got busy and some mail came in that you didn’t see. Instead, it’s knowing that there’s something you need to take care of that’s financially related.

Honestly, I think avoidance is the most common form of money shame. There are so many aspects of our business finances that are either easy to ignore or we want to ignore because it’s really not fun or comfortable to deal with it.

Now, here are the avoidance justifications.

Avoidance reinforces your limiting beliefs about money. You’re just creating a cycle for yourself and it’s really hard to pull yourself out of that cycle when you get very deep.

The void is convincing ourselves that our capacity or our ability with money that aren’t necessarily true because you’ve avoided that. You haven’t even tried it. You could be awesome at it, but you don’t know. But you’re saying you use it as an example.

Download the money shame worksheet that walks you through each of the 5 ways money shame shows up in business and gives you a place to write out where it’s showing up for YOU. Next week we’ll be talking about tracing the roots of money shame- which is the first step in healing money shame.