Guess what! You’re not bad at money. In fact, there are parts of you that are really really good at money! Now before you take me on a trip to eye roll city- let me explain.

There’s A LOT of stuff we believe about money. And most of this stuff is actually NOT TRUE. But…we still believe it anyway. Either because we’ve never heard an alternative or because we’ve internalized these falsehoods so much that we don’t know how to start letting them go.

What gets in the way are knowledge gaps, learning the practical skills of money (which often fill the knowledge gaps), and our internal belief systems about money.

So I’m going to rock your internal belief system and expose some of the most common myths about how to be good with money.

False: You need to be good at math to manage your money

This is something a lot of women internalize since, from a young age, women are taught that we’re not supposed to be good at math and sciences. Growing up I remember a distinct feeling that, as a girl, I should focus on language arts and writing and not so much the math stuff. And if I wasn’t doing well in math and sciences it was like, “Well, you’re a girl so that’s expected.”

As adults, this very old belief lingers. And, because money has numbers in it, we immediately think math and money are intertwined. Which means that if we’re bad at math we must be bad at money, right?

Shifting the mindset: First of all, you’re probably not as bad at math as you think you are. Up until my early 20’s, I believed I was bad at math. It was actually something that was part of my overall identity. Then, in my early 20s, I took a statistics class and was shocked because I aced it. And not only that- I LIKED IT.

What I realized is that because I thought I was bad at math, as soon as anything mathematical or with numbers popped up, I retreated to a place of resistance. I didn’t even bother to learn math because I believed so strongly that I was bad at it. Which meant I never had the opportunity to see this belief was true or not.

I never LET MYSELF be good at math.

But maybe you do legitimately have a hard time with math and numbers and that’s real too. We all have our strengths and weaknesses and sometimes math isn’t our strength. You’re still good at money too.

Also, we’re living in a glorious time where we have access to SO MUCH technology that does the math for us. Calculators. Spreadsheets. Bookkeeping programs– all of these are tools that will do the math part of money, so you can focus on the commitment and willpower part.

If you’re stuck here: Make a list of every single positive action that you’ve ever taken with your money that doesn’t rely on math. This means ANYTHING that you’ve done with your money, recently or in the past, that has been positive.

It could be saving $50 once, reading this blog post, making an extra credit card payment, even just researching money on Pinterest- anything that was positive and didn’t involve math goes on this list. This list will be your proof list- every time you fall back into that belief that math is essential to good money management- use this list to remind yourself that it’s not.

False: You should have all your money figured out by now

This belief comes from the pressure that we put on ourselves as small business owners to know and to figure it all out RIGHT NOW. We expect ourselves to have collected all of this knowledge that is supposed to just magically appear and bestow itself onto our brain.

When we can’t meet this expectation, we’re ashamed that we don’t know every single finite detail of money. Operating from a place of shame, instead of asking questions, we stay silent in our shame bubble hoping no one will notice what we don’t know. And we never reach out to fill our knowledge gaps.

Admitting that we need help, information, and resources opens the door to finding the answers we need because we stop hiding from what we don’t know. Talking with each other and sharing our knowledge, and our knowledge gaps are how we learn. We can support each other and learn and grow together but first, we have to give voice to our questions.

If you’re stuck here:  Set a time for 5 minutes and brain dump everything you know about money. List every single thing you know, no matter how basic it is. In fact, including the basics like “using my debit card means money is debited from my checking account”, reminds you that you understand the foundations of money.

This list is here to remind you that you know a lot about money. After 5 minutes you’ll be surprised at how much you actually know about the way money works in your life and business. 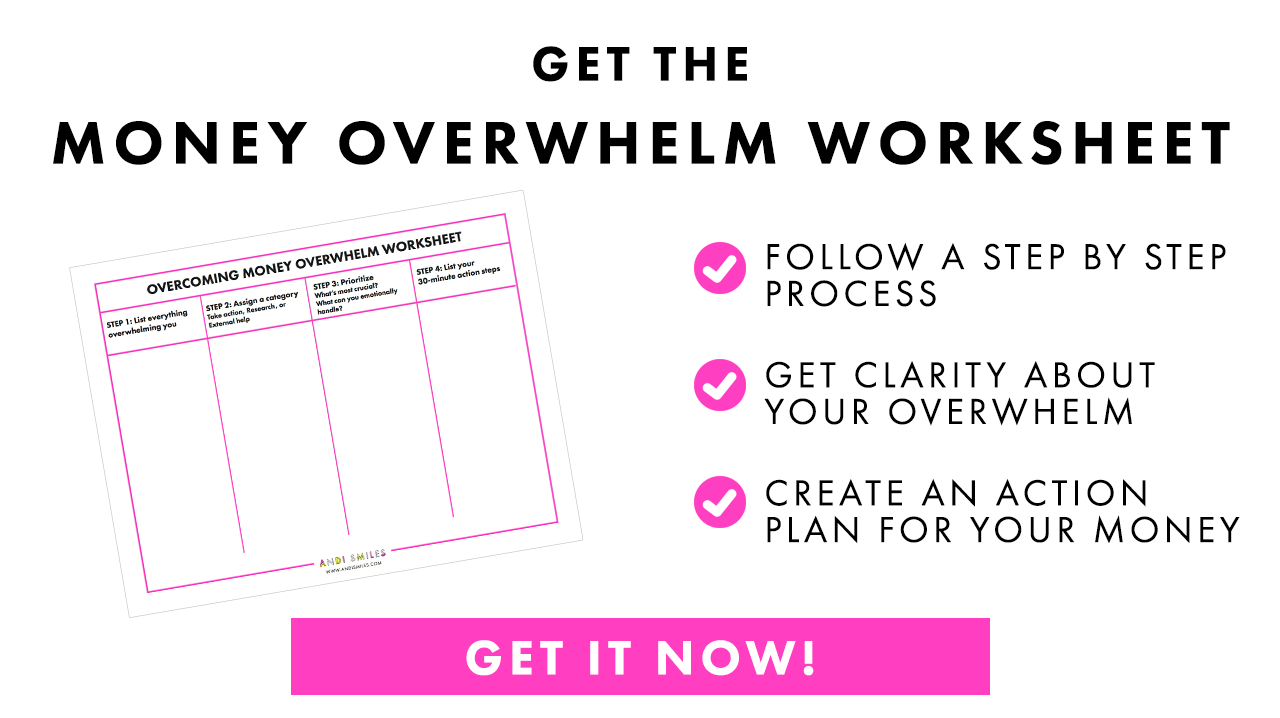 False: Your money isn’t as good as everyone else’s

These stories create a comparative mindset where we compare our money with everybody else’s. What we don’t hear is the messy stuff. Which means we’re comparing ourselves to a one-sided mirror.  We only see one piece of someone’s money story and yet we fixate on it and use it to feel bad about our own money.

But the truth is it doesn’t matter what someone else’s money situation is like (one-sided mirror or not). What matters most is your money. All the time and energy you spend comparing your money to someone else’s takes away from time you could spend working on your own money.

Money is a journey and we all start at end in a different place. It’s like a fingerprint. No one starts off in the same place with money because no one has the same background and history with it. And we all go at our own pace with money, which means one person’s pace isn’t going to be the right pace for you.

Shifting the mindset: Here’s a metaphor to consider about comparing your money to someone else’s:

Imagine that you commute to work every day and you have a route that you ABSOLUTELY love. You love the way the trees look, the way the houses look, the smells along the way, and the little farm stand you see on the side of the road.

When you get to your destination are you judging your route? Are you putting yourself down for the route that you take? Are you comparing your route to your neighbor’s route?

If you’re stuck here:  Think about someone who you’ve been comparing your money to and reflect on one thing that they’re doing that could positively benefit your money. What can you learn from this person’s money that would be helpful to you?

Next, reflect on what you can do to implement this learning and make a commitment to yourself to take that action. What we are doing is shifting from a comparison mindset to a learning mindset, which moves us from a place of disempowerment about our money to a place of action and growth.

Money is a journey and we all start at end in a different place. Click To Tweet

We live in a world where bigger = better, better = more, and more = success.

There’s a lot of more, more, more in our general consciousness and more is equated with being successful. Naturally, when we have a small money win we don’t think of it as a win because we fixate on how it should be bigger.

But here’s the thing: tiny little actions lead to big change. And I guarantee you that there’s been some small positive action that you’ve taken for your money in the last 24 hours that you haven’t acknowledged it yet.

Shifting the mindset: When you acknowledge tiny money wins what you’re really doing is shining a spotlight on the part of yourself that’s good with money. You’re saying, “Hey good with money part of me. I want to give you space. I want to put you on stage.”

Instead of just pushing aside your money wins and focusing on what you did wrong, shine the spotlight on them- even if it’s just for 30 seconds.

Here’s another metaphor just to consider: Imagine going to a party. You show up at the party and you’re really excited to be there. You walk in the door and nobody acknowledges you. You walk around, grab some snacks and still no one’s talking to you.

Would you want to go to this party again if you were invited? Hell no! That party sucked!

When those tiny moments happen, the good with money part of you is showing up. Acknowledge it, say hello, and thank it for coming. Give it a reason to come back.

If you’re stuck here: Celebrate every single tiny money win. The celebration doesn’t need to be a huge thing. Instead, focus on tiny celebrations that acknowledge your success.

It could be texting your best friend, taking a selfie in front of the coffee shop after you skipped buying the latte, or even just taking 3 big breaths in acknowledgment. Whatever it is- take a pause and appreciate your small money wins.